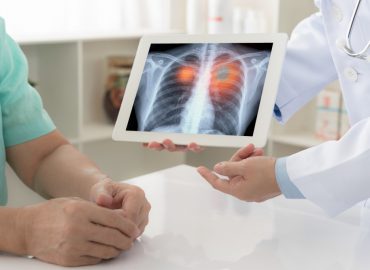 Lung cancer is by far the leading cause of cancer death among both men and women.

Each year, more people die of lung cancer than of colon, breast, and prostate cancers combined. The five year survival rate for lung cancer is only 17%.

Overall, the chance that a man will develop lung cancer in his lifetime is about 1 in 15; for a woman, the risk is about 1 in 17. These numbers include both smokers and non-smokers. For smokers the risk is much higher, while for non-smokers the risk is lower. A common view of lung cancer is that it is self-inflicted by smoking – and that the problem will eventually disappear when everyone gives up the habit. But aside from the fact that none of this helps former or current smokers who currently have the disease, there are two major flaws with this thinking.

Firstly, lung cancer cases aren’t declining across the board. Globally, while the number of men diagnosed with lung cancer has dropped over the last two decades, among women it’s risen by 27%.

Secondly, the proportion of lung cancer patients who never have smoked is going up.

This, too, seems to affect women differently: one study has found that one in five women who develop lung cancer have never smoked, compared to one in 10 men.

Lung cancer screening represents an exciting opportunity to fundamentally change approach to our patients and save lives from lung cancer.

USA and Canada currently already have Lung Cancer Screening programs for adults aged 55 to 80 with a history of smoking. There is no such screening program in Australia.

The results from the European (NELSON) and American (NLST) Lung Cancer Screening studies recently presented at the International Association for the Study of Lung Cancer provided compelling evidence supporting the need for lung cancer screening. NELSON results were even more profound than those seen in the NLST, demonstrating a 26% reduction in mortality for men and 39–61% for women with screening.

Current Lung Cancer Screening is with low-dose CT annually. This approach has a number of potential problems including exposure to radiation with CT. As a result MRI screening has been explored as a potential screening test (MRI has no radiation).